Rosemary Tonks: A painting emerges from her house

Posted on 3 November 2015 by Leigh Hatts

What was in Rosemary Tonks house during her thirty years there?

Very few people, if any, entered her home at the top of Bath Hill where she lived in seculsion. She was a famous poet who had disappeared and no one knew where she was .

The oil painting, dated to the 1920s,  is being auctioned at Ewbank’s in Woking this month. Rosemary Tonks gave the picture away in May 2013 when she moved from her Victorian staff cottage to a flat in nearby Forest House, a modern block which had replaced the Victorian big house.

The painting probably came to her from her widowed aunt Dorothy who gave her a bed in her Bournemouth home when Rosemary fled London in 1979. Dorothy’s husband was painter Myles Tonks (1890-1960) who had inherited art books from his famous uncle  Henry Tonks.

Rosemary Tonks died in the spring of 2014.

The best account of her hidden life in Bournemouth has been written by Neil Astley in Bedouin of the London Evening: collected poems by Rosemary Tonks  (Bloodaxe Books £12)

He was secretary of state to Pope Pius X and and is thought to have nearly became Pope himself when present at a conclave.

His childhood was spent in Bournemouth where he lived in a house called Fulbeck (now Britannia Hotel) in Meyrick Road. The family moved there in 1862 when Raphael was aged two.

His first school was St Aloysius (now Premier Inn) in Poole Road. The family attended the Sacred Heart Church on Richmond Hill which was then still a wooden building.

Raphael and his parents are thought to have used the hexagonal postbox on the corner of Grove Road. The new pillar box was then on the north side of the road next to Fulbeck. It was relocated to the south side after the Second World War.

Earlier this month Pope Francis met participants in a “Meeting organised on the occasion of the 150th anniversary of the birth of the Servant of God Cardinal Merry del Val”.

Posted on 2 September 2015 by Leigh Hatts

A blue plaque has been unveiled on Boscombe’s Old Schoolhouse in Gladstone Road to recall Frederick Moser and Sir Percy Shelley.

Sir Percy is known as the poet’s son who live at Boscombe Manor which we now call Shelley Park.

But who was Frederick Moser?

Frederick Moser (1822-1911), was a Southbourne landowner who for 13 years helped to run his father’s large ironmongers, Mosers Ltd. It was founded in 1787 and stood opposite St George the Martyr Church in Southwark. The site in earlier times had been occupied by Brandon House where Mary I spent one night of her honeymoon.

In 1862, having been widowed, Frederick left the business in the hands of three other family members and retired from London to Mudeford. By 1867 he had moved to a large house called Carbery (now Belle Vue Close site) which stood back from the north side of the main road running through Southbourne. The house, named after the builder’s home in County Cork, had extensive wooded grounds covering the south end of today’s Carbery Avenue.

In 1868 two sons from Moser’s first marriage were drowned.  Moser married again. His second wife was Frances Woodwark, daughter of the Christchurch Congregational minister. Moser was deacon at Pokesdown Congregational Church where he and his wife donated a new schoolroom opened in 1877. Earlier, in 1872, Moser chaired a meeting which called for Pokesdown to have a railway station.

In 1887 he helped pay for Golden Jubilee medals to be presented to children. So his joint gift of  a school at Boscombe was just an extension of his generosity.

More information on Moser has been included in a new book The Village of Tuckton by Alex McKinstry.

A memorial stone to Pilot Cecil Hight has been placed at the Walsford Road, Benellen Avenue and Leven Avenue junction on the west side of Meyrick Park.

The stone was dedicated by St Peter’s rector Ian Terry on the 70th anniversary of VJ Day which marked the end of the Second World War. Dr Terry’s wartime predecessor Headley Burrows, father of Bishop Burrows, was in the area during the overhead battle and went straight to the body.

“He was a New Zealander determined to fight and do his bit for the war effort, so he joined the RAF. His plane came down around 50 yards from this very spot.”

Also present was Tom Harrison, who had seen the plane fall as he watched the dog fight from Branksome, and Margot Mabey, widow of another witness Dennis who was 13 at the time.

The body of the young New Zealand pilot was found in the back garden of a house in Leven Avenue. The occupant and his wife, Alfred and Edith Hoare, made a memorial in the garden but three months later the house was bombed and Alfred was killed.

In the town here is Pilot Hight Road named after Cecil Hight.

For twenty years he was Bishop of Buckingham and at his death he was honorary Assistant Bishop of his home diocese Winchester.

His grandfathers were both bishops.

Simon Burrows was aged 8 when his father Headley Burrows was appointed vicar of St Peter’s Bournemouth in 1936. By the time his father left in 1942 to become Archdeacon of Winchester, the country had entered the Second World War and Simon was at Eton.

Just before the family left Bournemouth, his father organised a chain of buckets to prevent the church catching fire following the bombing of Beales opposite which created a big fire.

Simon was able to reach back 140 years for as a child in Bournemouth he met the verger Harry Crumpler who had been appointed by the town’s first vicar Morden Bennett.

As assistant Bishop he worked with Bishop of Winchester Colin James who had been vicar of St Peter’s Bournemouth in the late Sixties.

The funeral of the Right Reverend Simon Headley Burrows is at Winchester Cathedral on Friday 21 August at 11am.

He discovered a love of poetry whilst staying with his aunts in Bournemouth at their house called, by chance, Grantchester Dene. Brooke had yet to live at Grantchester near Cambridge.

Brooke’s death came during the First World War. He had receive a parcel of clothing from the ‘Mayor and Corporation of Bournemouth’ and was last in the town three months before his death.

Now a new street in London is to be called Wollstonecraft Street.

The location is behind King’s Cross and St Pancras Stations.

The pioneer feminist and author lived nearby and on her death in 1757 was buried in St Pancras Churchyard. Just over fifty years later her body was moved to St Peter’s churchyard in Bournemouth. 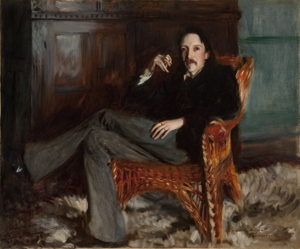 Both depict author Robert Louis Stevenson at home in Westbourne.

Sargent visited first in 1884 but the painting made on that occasion is lost.

The 1885 painting, lent from Arkansas, is called Robert Louis Stevenson and His Wife. Stevenson is standing in his bare boarded room which has just a rug. To one side sits his wife Fanny wearing, at her husband’s request, an Indian dress. Between the two is an exciting glimpse of the steep stairs and an outside door.

It is probable that Singer is trying to show Stevenson in one of his excitable moods which often led to him walking around when talking.

The house was Skerryvore in Alum Chine Road and the only good record of it is a drawing by Leslie Ward. The building was destroyed by Second World War bombing but its outline survives with the garden open to the public.

At this time in the mid 1880s the author was becoming well-known due to the recent publication of such books as Treasure Island.

The 1887 painting, lent from Ohio, was undertaken over just a few days in April. Stevenson was not well and sits in a wicker chair chain smoking as was his habit. By now his fame was greater following the release of Kidnapped the previous year.

The artist was also having success and that year took a studio in Chelsea’s Tite Street before being acclaimed during a visit to America.

In the 1885 picture, Fanny sits in the chair loved by Henry James whose later portrait is in the exhibition. The 1885 portrait, having been shown in London, returned to the Stevensons for a time and it was on a visit to Westbourne that James saw it on the wall.

The artist got to know Stevenson when he studied in Paris with his cousin Carolus-Duran whose portait is among around 70 on show.

An 1897 oil shows Mrs George Batten Singing. This is of interest since she later set up home with author Radclyffe Hall who had been born in Durley Road in 1880.

The poet Coventry Patmore is depicted near the end of his life when he was living in Lymington.

The Westbourne portraits are shown together. Henry James and Mrs Batten are next to each other.

The exhibition souvenirs on sale include a 70p postcard of the 1885 painting.

Sargent: Portraits of Artists and Friends is at the National Portrait Gallery in London’s Trafalgar Square daily until 25 May; admission £14.50 (conc £13).

Gerard Hughes SJ to be buried in Wales

Posted on 7 November 2014 by Leigh Hatts

Fr Gerard W Hughes SJ,  who died this week at Boscombe aged 90, will be buried  at St Beuno’s Jesuit Spirituality Centre in North Wales where he was once based.

In 1985, just three years after leaving Wales, his best seller book God of Surprises was published by DLT.

His funeral will take place at Farm Street Church in London at 2pm on Monday 17 November.

Posted on 4 November 2014 by Leigh Hatts

Fr Gerard Hughes, Jesuit priest and author of God of Surprises, died this afternoon in Boscombe.

He had retired to the house attached to Corpus Christi Church.

He died hours after All Souls Day and a week after the publication of his last book Cry of Wonder.